Our dad, Jo Coomans passed away on 30 January 2015 and we buried him on 6th February.

For those who couldn’t attend, here are some captured moments of the day.

Harry produced an excellent booklet [772 kB] and an Audio Visual presentation [111 MB], which was shown at the end of the Service.

In 1947, Jo was employed by the “Bureau Hydrografie” at the Badhuiskade in Scheveningen (for all intents and purposes a suburb of The Hague). His job was as a draftsman, creating and correcting Navy Hydrographic Charts.

While he was unhappy at the Bureau towards to end of his employment (one reason to migrate to Australia), it’s clear that he enjoyed the camaraderie of colleagues and made friendships which lasted many years beyond his departure. He corresponded with one of them, Han Hoogenkamp until that colleague’s death more than 20 years later.

I was lucky to visit “the Bureau” a few times as a teenager and well remember the long room (tekenkamer), which faced the park so they would enjoy natural light.

Nowadays, charts are produced by computer (and printed copies are increasingly rarely used). In those days charts were drawn by hand, carefully constructed from coordinates and soundings. It was a trade steeped in traditions going back hundreds of years. Early charts of Australia (New Holland) and Indonesia (Durch East Indies) were made by Dad’s predecessors in the 1600’s. It’s probably true that, working as a civilian for the Navy, some of its history and traditions proved stifling for a free spirit with artistic rather than bureaucratic ambitions. Apart from drafting, his tasks were to supervise printing of the charts by a printer, Marchant-Paap-Stroker (MPS) in The Hague. He would spend days there in a Quality Control role during print runs. The photo on the left is from Dept of Defense webpage showing him supervising the printing of charts. By the way, that page is wrong on the location. There were never any printing presses at the “Bureau”, but they were printed under contract by MPS.

I’m slowly cataloguing Dad’s creative output, initially his paintings and drawings. Among them are some surprises. This self-portrait is different from most that he has done. A great likeness, from an unusual technique.

Another surprise is to see some work by others among Dad’s “collection”.  Herman Mees was a well regarded artist who taught at the Academy in Rotterdam. At that time (1942), he was the head teacher there. Here is his entry in Wikipedia. His portrait of Dad is a little gem.

I’ve been sorting and archiving Dad’s artwork after capturing most of it digitally in December. While I was familiar with most of the works, it’s nice to discover  drawings and paintings with which I wasn’t  familiar. For example this sketch of the Leede (“tuindorp” in Rotterdam), done in 1944. It shows that confident hand and “eye” for which he should be remembered.

Out of curiosity, I looked up the location on Google. The church tower is hidden by the leaves of the tree, but it’s pretty much the same 70 years later.

Looking for a good home.

Yes, we’re looking for a good home for this organ from the famous Dutch maker of church organs, Johannus. Originally bought by an enthusiastic organist for his private use in 1989, this organ is

still in a fine condition and would suit a small church or organ enthusiast. Finished in solid oak with bench, it presents really well.

When purchased, the Australian list price for this organ was A$12,186. We’re keen to find a good home for the fine example of an electronic organ. We will let it go for a small amount, well below its real value, to a buyer who appreciates its value. Call Marius on (0411) 248 617 to register your interest, request further information or an inspection on site in Penrith, NSW.

[Later: we’ve found a good home for it at Rochford Place, Ropes Crossing.]

While the focus here is on our parents, Jo and Adri, it’s inevitable that we’re faced with our own history.

I spotted the photo of Simon in the assortment of memorabilia waiting for him to pick up next time he’s in Penrith. And yes, I’m returning it to his “cache” before he misses it.


It figures that there was a photo of yours truly from the same year (1958-59) and sure enough, there was.

Harry, did you find a photo from the same year as well?

The Johannes Calvijnschool was our primary school while we lived on the Cannenburghlaan. I found class photos of the period at theschoolbank.nl website and downloaded a few class photos of Simon’s class of 1956 and 1958 as well as my class of 1958.
Surely you recognise us? (click on the photos for a larger version)

This letter was written to Dad in late 1944. At the time, he was in hiding at “Peer de Hoed” after escaping from a barge as he and and his future brother-in-law, Jord were on their way to Germany as forced labour. I remember him telling us about the worst blisters in his life which he got while escaping (as well as being shot at…

The letter is not in a very good state, here is what I can read of it. A scan of the original is here. (12/12/16 – Added a few missing words, Thanks Arie Kooij! And thanks to Simon for “gekebbel…”)

Old wife how do you do?

I found an early “Electronics Diary” among Dad’s stuff yesterday. It was published by “De Muiderkring”, a publisher of popular electronics magazines and books in Holland.

I took it home as a curio and leafed through it today, only to find a few gems (click for higher resolution versions): 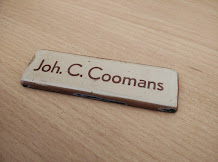 I spend much of the past week cleaning up Dad’s “rommel” room. Lots of memories, I wanted to post a few fragments here. The name plate is from our letterbox when we lived in The Hague from 1954 to 1959 (Cannenburghlaan 273).