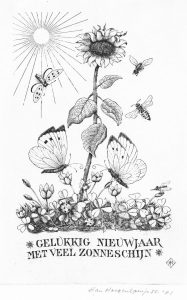 So, there we are… another year gone! While I would have liked getting more of the family site built, it now has just over 400 items, at least enough to see where it’s heading…

I really enjoyed scanning in some terrific Christmas / New Year cards from Han Hoogenkamp recently, he was one of Dad’s colleagues back in Holland at the Navy (see earlier item). They’re all hand-made (more on Han’s page) and a wonderful memory of the man, who I remember very well. He taught Dad to play the organ, was a valuable colleague at the Hydrographic Office and kept in touch for many years after we left for Australia.

In 1947, Jo was employed by the “Bureau Hydrografie” at the Badhuiskade in Scheveningen (for all intents and purposes a suburb of The Hague). His job was as a draftsman, creating and correcting Navy Hydrographic Charts.

While he was unhappy at the Bureau towards to end of his employment (one reason to migrate to Australia), it’s clear that he enjoyed the camaraderie of colleagues and made friendships which lasted many years beyond his departure. He corresponded with one of them, Han Hoogenkamp until that colleague’s death more than 20 years later.

I was lucky to visit “the Bureau” a few times as a teenager and well remember the long room (tekenkamer), which faced the park so they would enjoy natural light.

Nowadays, charts are produced by computer (and printed copies are increasingly rarely used). In those days charts were drawn by hand, carefully constructed from coordinates and soundings. It was a trade steeped in traditions going back hundreds of years. Early charts of Australia (New Holland) and Indonesia (Durch East Indies) were made by Dad’s predecessors in the 1600’s. It’s probably true that, working as a civilian for the Navy, some of its history and traditions proved stifling for a free spirit with artistic rather than bureaucratic ambitions. Apart from drafting, his tasks were to supervise printing of the charts by a printer, Marchant-Paap-Stroker (MPS) in The Hague. He would spend days there in a Quality Control role during print runs. The photo on the left is from Dept of Defense webpage showing him supervising the printing of charts. By the way, that page is wrong on the location. There were never any printing presses at the “Bureau”, but they were printed under contract by MPS.